This morning The Capital reported on the interesting and amusing story of Generation Z Annapolis Alderman Dajuan Gay and his private Instagram account:

It’s no secret that Alderman Dajuan Gay was frustrated with the city’s approach to regulating short-term rentals. The Ward 6 Democrat made those feelings known at several council meetings.

But for 1,425 of his private Instagram followers, they know in even greater detail Gay’s thoughts on the legislation which include calling it complaints about “rich people problems.” Prior to the start of a different meeting, Gay posted “Meeting < Game” alongside a picture of an NFL football game….

……After 8:30 p.m., during the Nov. 18 meeting’s public comment period, Gay posted a photo to Instagram from the dais, according to a screenshot of the photo obtained by The Capital. The Capital does not have access to Gay’s private Instagram. 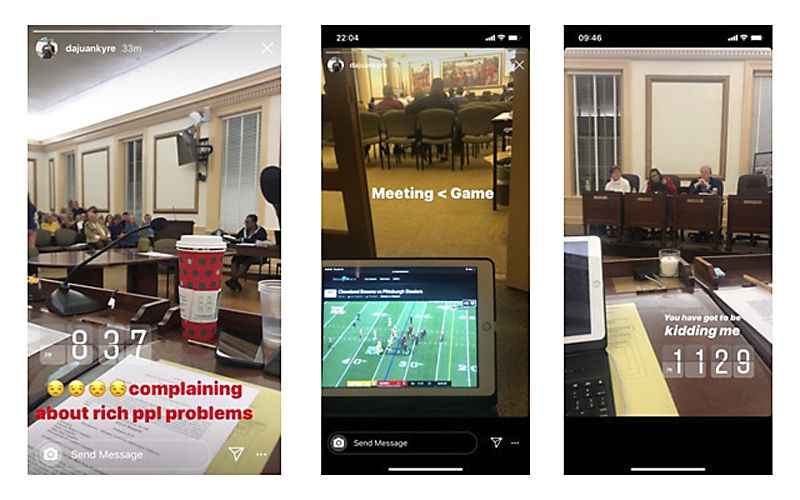 These, of course, are just a selection of Gay’s private social media posts. Heavens knows what other scathing pieces of political commentary he’s making where constituents, colleagues, and the media can’t see them.

Alderman Gay, of course, has a right to privacy on social media. When it comes to making public pronouncements during meetings about policy that’s more of a gray area. But the implication of all of this is very clear.

Alderman Gay wanted to make public pronouncements about policy and the people speaking about policy without the general public knowing it.

In the first post, above, Gay insulted people coming to the City of Annapolis with their problems.

In the second post, Gay showed that he was blowing off a meeting so we could watch football on his computer, in the proud Annapolis tradition of Martin O’Malley sleeping during a Board of Public Works Meeting, Saqib Ali missing votes taking a nap, and Bobby Zirkin playing solitaire during the SB-281 hearing.

In the third one, Gay is whining that a meeting went late.

All of these posts show one thing. That like other Democratic Socialists, Alderman Dajuan Gay isn’t interested in governing; he’s interested in whining and making a spectacle of himself. If the stress of attending a meeting is so great, if hearing people testify triggers him, if watching football is more interesting to him, Dajuan Gay should resign from the Annapolis City Council immediately and let somebody else do the job that he is clearly not interested in doing.

*NEW* BREAKING: Pfizer CEO Admits IT- Get Ready For HELL- He Said This At DAVOS
America's Freedom Fighters