As a follow-up to my piece from earlier today, I wanted to talk a little bit about fracking.

Let’s take a brief detour to talk about fracking. The area in question that is being looked at for potential hydraulic fracking is in the Marcellus Formation. Wikipedia defines this as:

The Marcellus Formation (also classified as the Marcellus Subgroup of the Hamilton Group, Marcellus Member of the Romney Formation, or simply the Marcellus Shale) is a Middle Devonian age unit of marine sedimentary rock found in eastern North America. Named for a distinctive outcrop near the village of Marcellus, New York, in the United States,it extends throughout much of the Appalachian Basin. The shale contains largely untapped natural gas reserves, and its proximity to the high-demand markets along the East Coast of the United States makes it an attractive target for energy development and export.

This is a picture of the entire Marcellus Shale area: 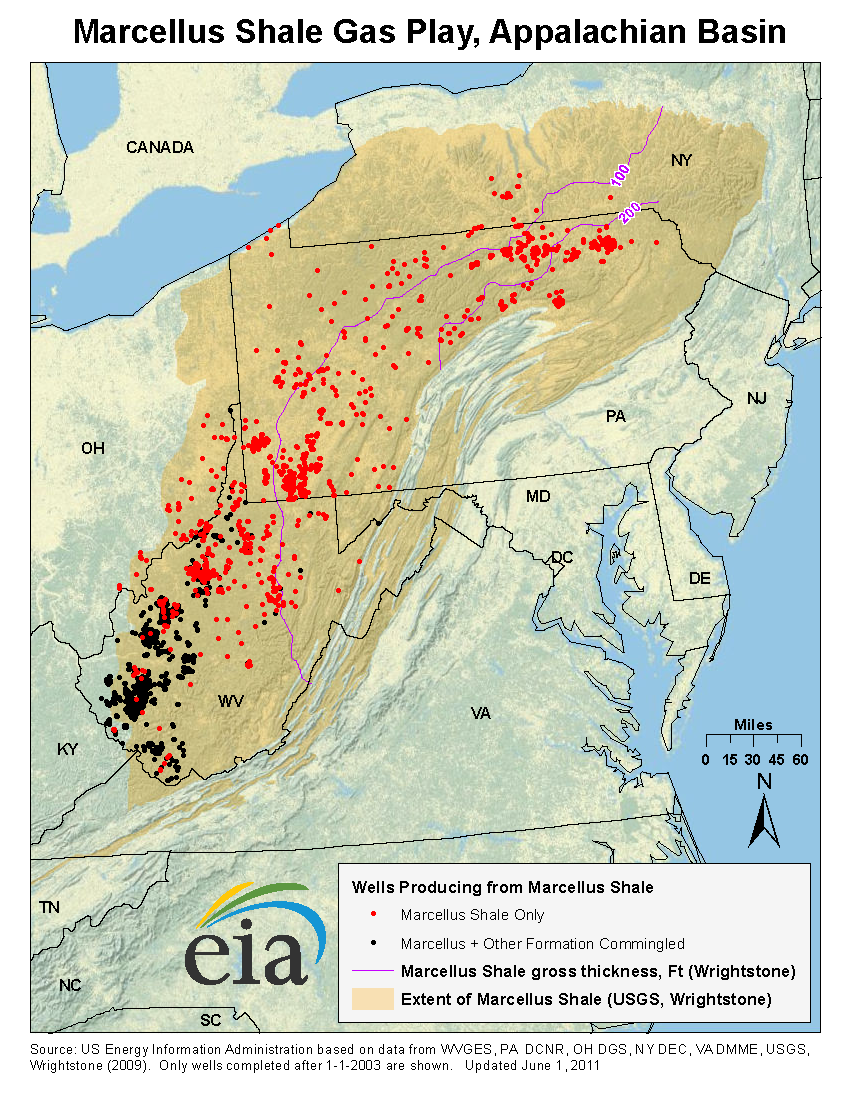 Note that the Marcellus Shale formation only extends as far east as Allegany County. And that’s a key fact when you take a look at the list of signatories to the above mentioned letter; none of the members of the Maryland General Assembly, all Democrats, that signed the letter live anywhere in the Marcellus Shale formation. And of the entire list of elected officials that are listed as signatories to the letter, only seven of them actually live in the Marcellus Formation. As we know, usually the people who do the bidding of anti-fracking groups are nothing more than energy rentseekers who want to get handouts from the government for other environmental boondoggles.

What does that mean? That means that a bunch of folks from outside the Marcellus formation are looking to ban the ability of Western Maryland to profit from their land rights and ban opportunities in the gas industry for residents of Western Maryland.

So who exactly is opposing fracking in Maryland? It’s certainly not the majority of voters and elected officials in Western Maryland. We spoke with Allegany County Commission President Jake Shade about the fracking issue back in December and his thoughts on the matter are insightful. But if you look at the coalition of groups that are part of the Don’t Frack Maryland coalition you will see the usual suspects of left-wing activists and Democratic interests groups that have led Maryland down the wrong path time and time again. Most of these groups are statewide groups that have little involvement or interest in Western Maryland. Certainly their political interests are tied up in the Democratic strongholds, where legislators probably could not name a single town in Garrett or Allegany Counties. They are certainly not interested to help Western Maryland fix its economic situation, one that was decimated by eight years of higher taxes and reckless spending by Martin O’Malley and the Democrats in Annapolis.

Now I’m not going to pretend that there aren’t other areas in Maryland that, long-term, would be affected by fracking. The USGS has identified a few other basins in Maryland that could potentially contained natural gas reserves. Other than occasional interest though, the bulk of the focus remains on Western Maryland and the Marcellus formation. And that, ultimately, is the real reason that so many left-wing groups are working to stand against the wishes of the people of Western Maryland. Much like in other areas, Maryland’s Democrats are fully disconnected from Western Maryland and the needs of its people. Maryland’s Democratic Party is so focused on what’s going on with the far-left in Washington, in New York, and in Berkeley that they have no time to focus on the economic needs and the economic struggles of Western Maryland. In Western Maryland, people need jobs and people need a way to become economically sustainable. For those individuals who own property that attracts the interest of the gas companies, it makes sense for them to lease those rights. Much like it also makes sense to ensure that local workers have opportunities to make a good wage working in the gas industry.

What’s most amusing about the gripes about fracking in Maryland? It’s the fact that fracking is already occurring closer to Montgomery County than it would if fracking were legalized in Maryland. Fracking that is occurring in Pennsylvania and Virginia is already going on, with no impact on the lives of Montgomery County residents. It is likely that the affect on most of Maryland from fracking would be minimal to zero. Not a surprising outcome when the EPA has noted that fracking does not pose a widespread danger to drinking water.

Obviously, we need to take care with fracking and need to make sure that wanton environmental contamination isn’t happening. But the best solution for all parts of Maryland is to keep fracking legal, thus allowing counties and municipalities the opportunity to ban fracking locally if they so choose. A one size fits all solution from Annapolis is not going to be sufficient for all parts of Maryland when it comes to fracking and it makes more sense to allow the local elected leaders who know their areas best to make the decision as to whether or not fracking is right for their community. Unfortunately, a lot of this is going to come down to the special interests groups for whom the people and concerns of Western Maryland is of no interest at all.

Pronoun Nonsense in the Navy and Beyond
The Black Sphere

Aaron Bean Endorsed by Marco Rubio for Congress
The Floridian