When you’re planning on running for Governor in two years, the incumbent is insanely popular, you really don’t have a lot of friends in your own party, and you have pathetically low name identification, this is the stunt you pull:

A mobile billboard rolled into Annapolis Wednesday with a challenge for Gov. Larry Hogan: “Will you support Trump as the Republican nominee?”

The opposite side proclaims “silence is an endorsement” of brash billionaire Donald Trump, who increasingly appears likely to become be his party’s nominee for president.

The billboard also bears a quote from Congressman John Delaney, a Democrat widely believed to have an eye on Hogan’s job, who paid for and dispatched the rolling political jab to the State House.

“Because everyone in Maryland will lose if Trump wins,” Delaney says on the billboard.

In a statement, Delaney said the billboard would circle the State House all day Wednesday “and if the Governor won’t provide a simple yes or no answer, it will come back tomorrow”

Words can’t really describe how asinine of a stunt this is. Except the stunt itself isn’t nearly as bad as the message itself. Because check this photo out from The Sun: 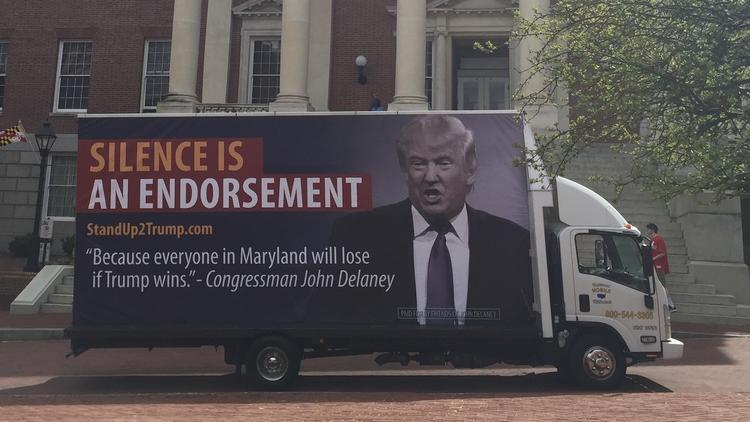 This type of dopey Hail Mary to earn some name recognition is completely insane, juvenile, and beneath the dignity both of the office of Governor and the U.S. House of Representatives in which Delaney currently sits. Delaney is merely playing into the Democratic Party’s Trump Obsession because Governor Hogan is running roughshod over the Democrats, with overwhelming approval from the majority of Marylanders. The Governor is beating the Democrats at their own game, and they are desperate to try and get something to stick. Combine that with a fabulously wealth 1%er who desperately wants to be liked by his own party and wants people to know that he exists so he can run for Governor himself, and that’s how you wind up with this.

Except Delaney’s involvement in an idiotic political stunt may have a genuinely simple explanation, and it’s revealed at the end of the Sun article:

Delaney’s spokesman Justin Schall said that Trump’s “hatred and bigotry” were one of the biggest problems facing the country, adding “the governor was “playing politics in stead of leading. He should lead. It will take less than five minutes to answer this simple question.”

And now it suddenly all makes sense. Because Justin Schall, remember, was the campaign manager of Anthony Brown’s failed campaign for Governor in 2014. Delaney came to work for Brown after Delaney’s 2012 campaign, and then he skulked back to work for Delaney as he prepares for his own statewide run. This signifies that Delaney plans on running a filthy, dirty, and nasty campaign in 2018; Brown’s campaign was notorious for this during his run against Governor Hogan, and Schall has a sordid history of dirty tricks and tactics that we documented here in 2014; ironically, Schall’s record would qualify him to work on Donald Trump’s campaign.

So to recap: John Delaney, understanding that he’s a giant zero statewide, decides to hire a truck to try to get Governor Hogan to do something irrelevant, while simultaneously exposing the fact that his own statement has absolutely no logic and that he’s entrusting his campaign to the same dirty trickster that failed Maryland Democrats in 2014.

16 months before the General Election, I asked if Anthony Brown was KKT 2.0. Maybe John Delaney is KKT 3.o. Because with his tactics and his strategy to date, he looks like he’s playing to lose much more than he’s playing to win.

High Gas Prices For “Future of the Liberal World Order” – WTH is THAT?
Conservative Firing Line