In his opinion piece posted today on his eponymous website, Dupree lists a litany of taxes that Martin O’Malley raised during his term as Governor. The problem is, Dupree literally lifted the entirety of the list from this June 11, 2013 piece by Andy Brownfield, who at the time was the Examiner’s Maryland State House Reporter. And Dupree did so without attribution.

Here’s a screen shot of Dupree’s article, without the attribution.

We welcome Dupree’s coverage of Martin O’Malley’s Presidential campaign. After years of not covering Maryland politics, he seems to have finally discovered that there are local issues that are important to write about.  He at least got the attention of the left with this story of Dupree’s writings and his past foreclosures. He’s been speaking to local Republican clubs, the Maryland Republican Party, and his heavily involved with the Maryland Citizen Action Network. But sadly, Mr. Dupree seems only to be willing to pay attention to these issues when they are of national importance and, frankly by the looks of his commentary, he doesn’t have much to say that hasn’t been written better on these pages, or on the pages of blogs like Monoblogue, Old Line Elephant, Blue Ridge Forum, Potomac Tea Party, and tons of other personal blogs.

Of course at least those blogs know their counties, which is something we learned Mr. Dupree did not when he had a beef with our Greg Kline: 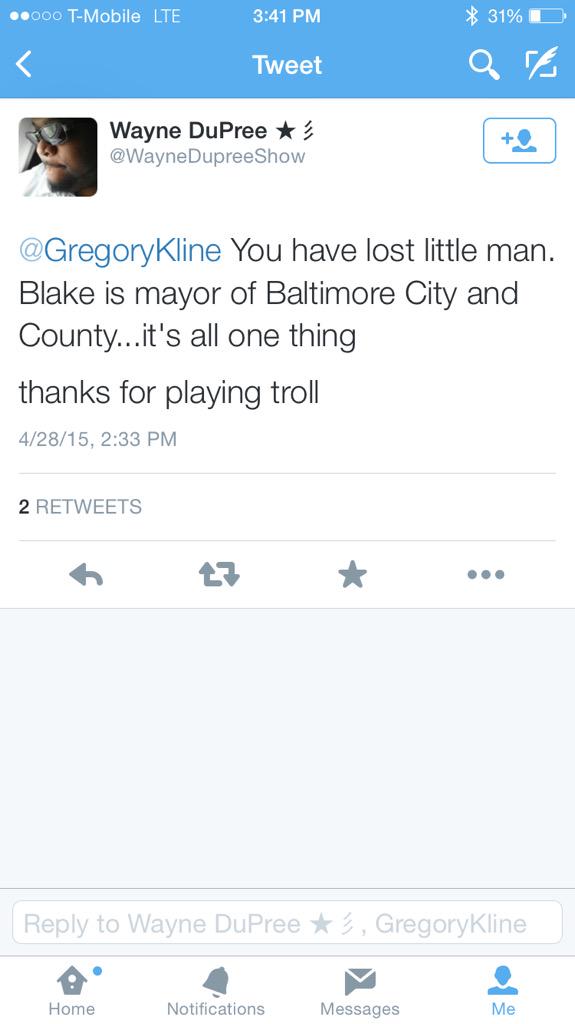 But where Mr. Dupree does go wrong is the fact that by stealing the work of others and claiming it as his own without attribution, he damages whatever credibility he has as well as the credibility of countless conservative blogs like this one and the ones that have been mentioned who have been working to provide accurate and legitimate coverage of the O’Malley years since the beginning. Folks like me, Greg, Mike Swartz, Matt Newman, Richard Cross, and countless others pride ourselves on being accurate and opinionated, but also by giving credit where credit is due. You don’t steal information without attribution, and if you use a source, you cite it or link to it. Period. And given the fact that he did it in this piece, how much of Dupree’s other work is not original? How many other writers and bloggers has Dupree cribbed from without attribution? And will the GOP and MDCAN rethink their association with Dupree and his work based on the fact that his own blogging can’t be reliably considered to be original work?

I for one hope that Mr. Dupree continues to pay attention to Maryland issues when national attention isn’t on Baltimore, and that he stops claiming the work of others as his own.

UPDATE, 6/1/2015: After Red Maryland’s story, Mr. Dupree updated his cited post with a link to a story by Jason Russell at the Washington Examiner that also uses the original source material from the June 11, 2013.

Bizarrely, he boasts about a screen cap (no link) to a Yahoo comment containing the list, and then says that somehow Red Maryland’s credibility is damaged due to his actions…..

I’m personally happy that Mr. Dupree decided to give something resembling attribution after he was caught. You can look at the screen capture in the original story above and compare it to today’s story to see the new attribution.