Charles Lollar kicked off his campaign for Governor today by starting a bus tour across Maryland, but that bus has been a source of consternation for the campaign so far.

On Friday the campaign sent out an email detailing the kickoff tour itinerary with a mock-up picture of the campaign bus. The bus though had one slight error…..

As you will note “Achieve” is misspelled twice on this mock-up. The campaign was quick to acknowledge it and did send out an updated email with an updated mock-up.

Today, with the bus tour in full swing, something else about the bus was brought to my attention: 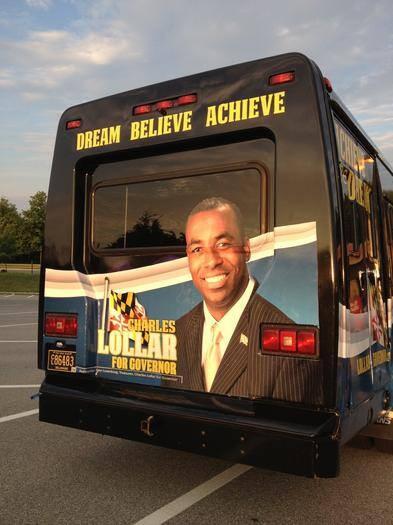 While Lollar is running for Governor of Maryland, the campaign patronized a Delaware business to rent a bus.

While both of these things are small in context, they certainly do hearken back to something that Greg wrote in June after our blogger sit down with the Lollar team:

“…raises doubts in my mind that Mr. Lollar and his many loyal and hard working supporters really have an adequate understanding of the intricacies of running a statewide electoral campaign.  While Mr. Lollar is an intriguing candidate, I have to report my candid opinion that he does not seem ready to be a serious contender for the Office of Governor of Maryland.”

We’ll see where this campaign goes from here.

Hunter’s Voicemail to Biden is Damning
The Black Sphere

How Leftists CRIPPLE the Next Generation
The Black Sphere