So I saw this gem on Interstate 97 on the way home from work today: 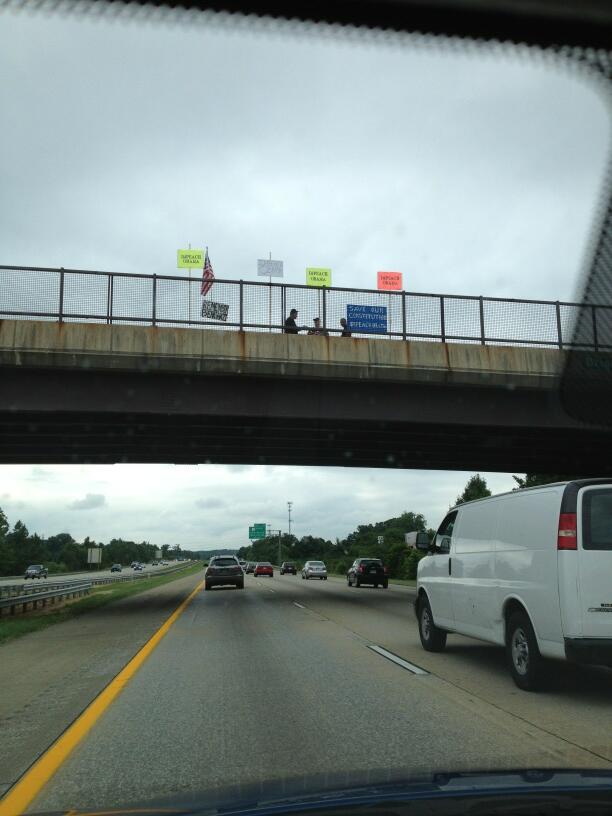 It’s hard to see, but the photograph is of three people joined by one U.S. flag and six very small, hard to identify signs that seem to indicate that these folks want to see President Obama impeached. I can see “Save the Constitution” and “Remember Benghazi”, and four smaller signs that say “Impeach Obama.”

This entire episode did absolutely nothing to help the plight of conservatism in Maryland. And while there are any number of reasons why these three folks on the bridge didn’t help move the ball forward today, here are a few off the top of my head:

So basically, the dudes on this bridge made no gains through their “protest” (if it’s worth calling that) and possibly set our side backwards a bit given the fact that what context was provided was that three white dudes were calling for President Obama’s impeachment. While there are times that organized protest is appropriate and useful, it is no substitute for actual voter education, voter registration drives, candidate recruitment, fundraising, door-to-door canvassing or other activities that actually win elections.
I hope these folks can find a more constructive outlet for their outrage, and help us do some good here in Maryland.

EDIT: Apparently this was a national event organized in some way shape or form, so the ball was dropped all over the country today and not just here.

*NEW* ANIMAL Sentenced To 37 Years In Prison- LOOK At What He Did!
America's Freedom Fighters

*NEW* WHOA: We Just Made Discovery About Two Smallpox Companies About To Go Out Of Business Right As Monkeypox Is EXPLODING- Coincidence?
America's Freedom Fighters